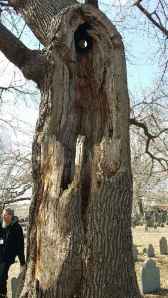 Time that drags is ample time to commit to El Bloggo!

And here we are, with the 3rd and final installment of the Boston Road Trip Extraordinaire.  That Saturday was supposed to be spent waking up leisurely, having breakfast, and heading to the nearby Mashpee Commons Mall to visit Cupcake Charlies and grab a dozen (YES – certain allowances are made for dessert!), before heading to Salem, Massachusetts, for the Bewitched After Dark walking tour.

We had just finished our leftover Halal Guys for breakfast when hubby plugged the address of the tour into his phone. Alas, it was 2.5 hours away, not 1 hour like I had thought (I was referencing the point from Boston to Salem, and we were situated 1 hour away from Boston as it was).

It was already 10:30 am, so we hauled asses to the Red Van and, after grabbing the requisite Dunkin’ Donuts coffee (it doesn’t come CLOSE to Timmy’s, in my opinion), sped off towards Salem. We arrived at nearly 1:00 pm on the dot, at the door of the Bewitched store, where we met our tour guide.

If you’re looking for spooky stories and haunted houses, this is not your tour! Though not scary by any means, it was fascinating and informative.  We started off viewing houses in which murders had occurred, and then walked through a graveyard where victims of the Salem Witch Trials were buried.  Sadly, the majority of women died because of false accusations.  I won’t ruin the experience with too many details, but I think it’s a fascinating look back in history and highly recommend it.  Also, there’s a tree that apparently gets struck by lightning every few decades.  Exciting!

Salem is a beautiful town. We smelled some heavenly food and longed to stay a while longer to dine, but were to head immediately to Fenway Park for our 2nd tour of the day.  We zip back onto the road and towards the big city of Boston, park, and get all excited for the tour, until….

Tours are fully booked today. Please come back tomorrow morning.  We try instead to find something good to eat near Fenway, and end up walking for an hour unsuccessfully.  Bo-ring and unexciting food options (not to mention the surplus of green- and scantily-clad youth in celebration of St. Patty’s Day which was also that weekend)!  Instead, we drive nearby in search of P.F. Chang’s, which is located inside the Prudential Building in (downtown?) Boston.  After discovering the 1+hour wait time for both P.F. Chang’s and the Cheesecake factory, we settle for pizza and other food-court delicacies, Crumbs cupcakes, and frozen yogurt/ smoothies instead.

And it all worked out, because the next day we were up bright and early, one of the first groups in line to get tickets, to behold the wonders of ‘ole Fenway and its rich, deeply-rooted history.

I loved Boston. I will be back.  And next time, I won’t be leaving without a lobster dinner (or three)! 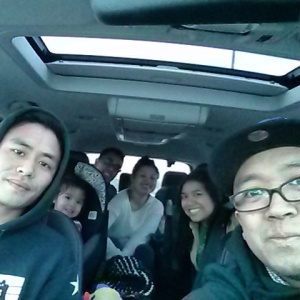 As I sit on my cold, hard floor at the insistence of, and beside, my new potty-training-in-training toddler, I seize the opportunity to write of a recent trip I took to Boston and New York with a great group of friends (and family).

It all began with softball (and what doesn’t nowadays, apparently) and the dream of two like-minded, separated-at-birth friends who longed to see a ball game at the legendary Fenway Park in Boston, Massachusetts. A “Green” fan ever since the Celtics won the NBA title in 2008, I was very excited at the prospect. That, and any place oozing seafood is enough to get me anywhere. So after a few late nights checking timeshare accommodations, calling many car rental places to compare quotes, and numerous vacation requests later, we arrive at departure day on a Thursday in the middle of March.

Our happy band of travelers consists of myself, hubby John, daughter Dani, married friends Mark and Kate, their daughter Audrey, also 2.5 years old, and faithful shotgun companion Aaron (who is a bigger person than I, managing to stay awake the entire time).

After collecting the big “Red Car” as the little ones called it (aka the Dodge Grand Caravan) and all of its passengers, we hit the road by 9 am. This in itself was not a seamless process… a chilly morning characteristic of the larger-than-life winter we have had this year resulted in two cranky, wailing toddlers, all within 15 minutes of being on the road. Bless their little souls, because that was the beginning and end of the crying fits for the rest of the trip. Yay, girls!

I shall take a minute to digress and do a little review of the Dodge Grand Caravan. My sister owns a Honda Odyssey, which I always found quite roomy and comfortable. This was not quite the case with the Caravan. Its ease in getting in and out of the middle and last rows via collapsible seats was offset by the cramped accommodations in the back. We had known to pack “lightly” (in either duffels or other soft-shelled packs) so we had enough cargo space, but literally just enough. Don’t plan on packing 4 regular-sized luggages in there. We kept a small cooler with water, juice and snacks in the middle row of the van, headed to Timmy’s for coffee and breakfast (of course), and arrived at our first stop, Walden Galleria, in Buffalo New York, before 11 am. After a visit to Dick’s for softball gear (obvi) and lunch at the Cheesecake Factory (even more obvi), we headed back on the road. With the occasional pit stop for gas and meals (we can also name this getaway the Great McDonald’s and Pizza Feast, because guess what we usually ate roadside), we finally arrived at the Cape Cod Holiday Estates in Mashpee, Massachusetts, about 1.5 hours driving distance to Boston, a little after 1:00 am. After searching through the desk in the entry hall, not finding our package of keys, and instead taking the “Backup Set,” we unload, do a little happy dance at our arrival, toss a softball around, etc. and then head to bed to rest up for the excitement of the next day in NYC.